Be an Example, Lead the Way!

In the spring of 2016, I was working at a country club near Boston, MA. I have been going up there on and off for the past several years, and obviously, the golf jobs are seasonal (I’m a PGA Pro by trade).

My mother’s boyfriend called me just after Easter Sunday in 2016 and said mom was saying some strange things and acting just a little more “off” then usual. Two days later my mother’s physician called me and told me ” Yes Craig, it looks like your mother has suffered a stroke.  I pulled it together and booked a flight from Boston to Jacksonville. She was in Flagler Hospital when I got there and after talking with several different Doctors, my younger brother and I decided she needed to go into a rehab facility. The Doctors at Flagler recommended Peninsula Rehab in Ormond Beach.

Now I have the unenviable task of going back to Boston and telling this new group of people that I have grown fond of  that unfortunately I am going to have to resign my position. My siblings and I had always discussed the fact that we would never put Mom in a nursing home or assisted living facility. Since I am the only one not married and no children, I would now have to take on the responsibility of taking care of Mom. Needless to say I had no idea what I was getting into. 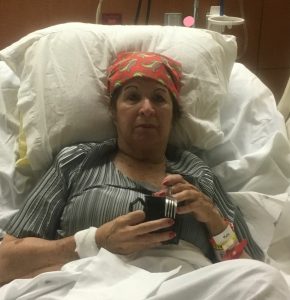 With the advice of her PCP, we started looking into the Mayo Clinic in Jacksonville because it is the best hospital in the state and they have an exceptional Neurology Department. Our first session was with her Neurologist Dr. Huang. They did several tests over the next few weeks to see if in fact she had NPH. Normal Pressure Hydro is an abnormal amount of spinal fluid around the cranium. This condition effects Gait and movement. A week later we met with the Neurosurgeon who would eventually perform the Shunt procedure.

It was so great having my sister here to help me for the whole week leading up to the day of the surgery and she was here when mom came out of the operating room. The three of us spent the night at the Mayo Inn because they were going to do the surgery at 6 am. Dr. Reimer informed us that the surgery went as well as could be expected, but when mom regained consciousness she couldn’t walk and her bladder wasn’t working at all so Dr. Reimer suggested she go to Brooks Rehab. She was there for 20 days and then she did another 20 days at their skilled nursing facility next door. She has been home since and it has been almost miraculous the way she is moving now, getting up and down out of chairs, her gait and movement are much improved and her incontinence is almost non-existent.

This one nice thing I did for my mother and I continue to do everyday hopefully has improved the quality of her life and will keep her spirits high so she can enjoy the next ten, fifteen or maybe even twenty years or whatever time she has left. I know as frustrating as it has been for me, I’m glad I was able to help my mother and I know she appreciates it.